Information regarding the new LOA model that is due to come into effect 1 July 21 can be found here.

The aim of Local Overseas Allowance (LOA) is to contribute towards the necessary additional local cost of day-to-day living, when Service personnel are required to serve overseas.

LOA rates are based on UK expenditure patterns and lifestyle standards, as well as the evidence obtained by the Allowance policy staffs via a visit to the USA and personal questionnaires. In order to capture typical lifestyle and spend data in the USA, with which to identify variations and formulate standards, questionnaires were analysed from several areas where high numbers of permanent posts were in receipt of LOA.

LOA is paid through salary and is dependant on rank, Personal Status Category and number of children, therefore you should ensure your personal details on JPA are correct, whilst informing the SpGp of any relevant changes. Rates will be provided on arrival and via BDSUS Comms for any changes thereafter. The rates as of 01 Feb 20 are as follows: 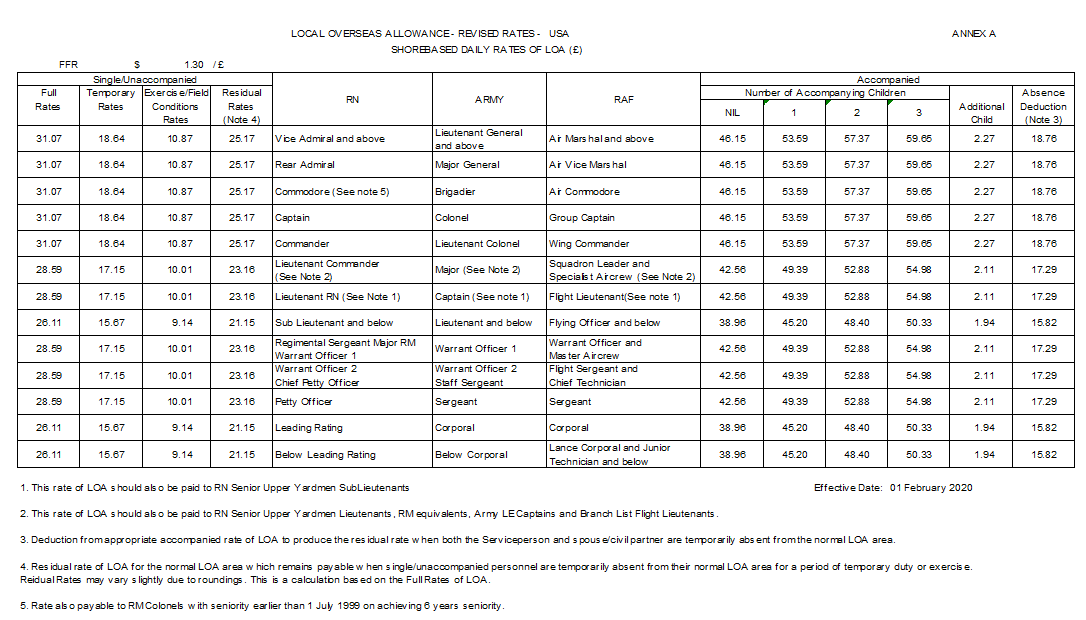 LOA is a non-taxable allowance paid in order to contribute towards the additional local cost of living when UK Service Personnel (SP) are required to serve overseas.

LOA recognises the amount by which average essential expenditure on living in a particular overseas location differs from that in UK, where appropriate taking into account the differences in the local lifestyle. LOA is not an incentive for service abroad and does not attempt to reflect the precise personal circumstances of individuals. Personnel are expected to spend the same proportion of salary on routine living that they would do in the UK, with LOA only meeting the assessed necessary extra costs which come about due to serving outside UK.

The following are the different areas of spend that contribute towards the daily rate of LOA for each country. Conventions are established for each of these areas of spend to reflect the average lifestyle in the UK and standards are agreed on how the overseas spend is to be determined. Some spends i.e. the buy/sell element of vehicles are paid monthly over an average tour length.

Reviews are conducted across each area of spend during visits to countries, and reference is made back to previous visits and related to specific locations/stores costed at that time. The visits are pre-empted by requests for SP in-country to complete a questionnaire, detailing their own spend patterns, and this information is clarified during interview groups undertaken during the visit. When reviews are conducted, the location of where in the country the pricing is undertaken is dictated by those in-country, to ensure nobody is disadvantaged. Similarly, the specific stores and restaurants used by those currently serving in-country are costed, which can explain variations the rates of LOA once a review is completed.

A full visit is conducted every four years, with update visits every two years; countries with larger numbers of personnel will be visited more frequently. It takes around three years to review every LOA location worldwide. In addition, a pricing review is conducted twice a year in Salisbury; as an example the food items list covers over 4000 individual items.

There is only one rate of LOA for each country, with only a few minor regionalised expenses included which are usually due to geographical issues. Countries with less than 20 SP are classed as Small Stations and the calculations of in-country expenses is outsourced, however data is gathered under the same protocols as those noted above and issued at small station LOA.

The convention for calculating LOA is based upon the Average Service Person, whom, for the UK military, is considered to be a 27 yr old male JNCO; if accompanied he has one 4 yr old child with the main areas of spend being car running costs and food at home. If unaccompanied the areas of spend are assessed as being car running costs and drinks/meals out.

For the purpose of pricing, the average service person is based in Salisbury and this is where costs for all UK items of spend are taken. It is worth noting that costs are not taken from London, as many individuals believe, and this is of benefit to those in receipt of LOA as the price differences from individual countries to Salisbury is likely to be greater than those of London.

On 1 May 11, LOA rate changed from 13 rates based on rank to three levels based on salary bands. The Factor is the method of calculating the LOA for each salary band as a multiple of that calculated for the marker rank; A JNCO is a factor of 1.0, SNCO-WO1 & OF2/OF3 is 1.1 and OF4 & above is 1.2.

Variations of LOA for Unaccompanied Personnel

Aside from the Factor Plan the main difference in LOA rates is due to the Accompanied Status of the SP. During a review of LOA, changes can affect one cohort differently to the other. This is due to the fact that there are a number of provisions for spouses/children for those accompanied; i.e. a second mobile phone, additional mileage on vehicles and a contribution for toys, which would not be relevant to the calculation of LOA for unaccompanied SP.

The following is an example of how the LOA convention generates an index of cost, i.e. the difference in UK cost against that in-country. The example is based on the ‘Drinks at Home’ spend and compares UK spending on drinks to those in an overseas location. The ‘weight’ of items is important as not all countries have containers of the same size or weight. In such instances the cost is calculated pro-rata to ensure an appropriate index is generated for that specific area of spend. Although over 4000 items are costed in the ‘shopping basket’, a selection of items is priced and the cost difference averaged out.

In this example for a selection of drinks that cost £17.82 in UK, the equivalent in-country cost is £33.51. This figure is derived from dividing the total dollar figure $51.27 by the FFR (£1= $1.53). The cost is, therefore, 188% of that in the UK, i.e. the cost in-country is 88% greater than the UK. If the average weekly UK spend on Drinks at Home is assessed as being £10, you would need £18.80 in the overseas location. As a result £8.80 would be put into the overall calculation of LOA. It is acknowledged that some items of expenditure could be less than that in the UK; the cost of petrol and running a car as an example. In these instances there is no reduction in LOA; this element is simply zero rated, as it is assumed that the UK living standard can be maintained.

As well as undertaking a direct cost comparison, it is noted that due to climatic, geographical and, potentially, legal reasons there are requirements to adjust certain areas of spend. This adjustment takes the form of an additional percentage, i.e. 5% or 15%, being added (noting that in some circumstances the percentage adjustment could be negative) to the LOA calculation for that area of spend. Therefore if there was a 5% adjustment, the £8.80 LOA would increase by 44p. A breakdown of items likely to attract an adjustment is as follows:

The calculation of LOA also includes a contribution towards the requirement to sell a car in the UK, purchase of a vehicle overseas and return to the UK market at the end of the overseas tour. The need for additional vehicles for accompanied personnel is also reflected. Consideration is given to the annual mileage of vehicles, covering all journeys that cannot be claimed under Home to Duty, or provided free as a concession; i.e. school runs, shopping, holiday and other private travel. In addition, specific in-country requirements are also reflected in the daily rate of LOA, however these contributions are spread across the average tour length in each country; these include the type of vehicle required (i.e. ‘4×4’), the running costs, wear and tear, legal requirements, winter tyres and increased use of air conditioning.

SP returning to the UK insurance market have experienced issues having their period of insurance overseas honoured for the purpose of a no-claims discount. Whilst not provisioned within LOA, it has been confirmed that insurance companies under the SIIAP membership will honour confirmed no-claims from overseas insurers. More information on specific providers can be found via the SIIAP website. SIIAP.

LOA for children in the CEA scheme

LOA is only payable in respect of a child for whom Continuity of Education Allowances is in issue – and who does not reside with the Service person in the overseas area when that child travels to that area in accordance with the regulations governing School Children’s Visits (SCVs) scheme (see Chapter 4, Section 10). It does not matter whether the child travels to be with the Service person under public or private arrangements as the eligibility to LOA is determined by the entitlement to travel at public expense sex times during an academic year; e.g. if six publicly funded return journeys have been taken but LOA was paid on only five of those occasions, a further period of LOA may still be paid up to the maximum of six times within any academic year subject to the child actually travelling to the LOA area to temporarily reside with the Service parent. If the Service person exercises the option to convert the entitlement of six return journeys per academic year to 12 single journeys, LOA remains admissible for only six of those visits in any academic year. The choice of which visits attract LOA rests with the Service person and does not necessarily have to be for the six main and half term holiday periods.  The Accompanied Rate of LOA in issue will be appropriately increased for the duration of the visit to reflect the increased number of eligible children temporarily present in the LOA area.

Other Areas of Spend Explained

Whilst not exhaustive, below is an explanation of some of the additional areas of spend provisioned within LOA: